Sometimes I Shock Myself!

So, with the advent of pregnancy and the onset of my battle with hyperemesis gravidarum - my updates on the war against tallerism have dried up... until now.

Since my last series of posts, we've moved house and now live a 7 min walk away from a station that takes me directly to work within 20 mins (thus enabling me to return to the office). It was on said train that this incident occured.

After quietly watching the minutes tick by on my watch, we finally arrived at my stop. Surprisingly enough, it seemed as though half the train wanted to get off at this stop. I took a quick look at my exits (equidistant) and chose the one I thought had a shorter queue.

A couple minutes later - with commuters still pouring off the train (noone had managed to board yet), the driver sounded the alarm to indicate the train was about to depart. Amazing how a steady 'peep peep peep peep' can inspire such animal reactions in 'normal' people.

A wave of panic spread through the carriages, heralded by groans and moans, as people spilled out onto the platform... there was trampling and squishing and pushing... ahead of me there was a female tallerist, another woman and a couple of men struggling to make it through the closing doors. My impaired speed (re: awkward shape and added weight) was no match for the electronics in those doors... I was not gonna make it off...

I don't know what came over me, I swear, but that wave of panic gripped me. There was no way I could stay on this train a second longer - I needed to puke, I needed fresh air, I needed my freedom...

Without realising what I was doing, I made a jump for the door: in one olympic bound I leapt into the air, landing nimbly on Lady Tallerist's back while she elbowed her way through the door - carrying me safely with her.

Once on the platform, I deftly slid off her back and planted my feet firmly on the ground as the train pulled away.

Amidst the throngs of disgruntled commuters packed along the platform, realisation sunk in... I had just jumped on a total stranger's back in order to get off the train. I had ridden someone like a camel!

I quickly looked around, Lady Tallerist was looking around in bewilderment rubbing her back. I'm guessing she was trying to figure out what had happened to her... was it the crowd pressing against her back or had someone ridden her out?

Without thinking I said : 'Thanks!' and rubbed my belly... she looked even more confused... I figured now was as good a time as any to disappear (before she figured out what I was thanking her for). I ducked between two tallerists and let the crowd take me out of the station.

Top side, I thought about what I'd done and how it must have looked. A petite pregnant woman jumping on a woman's back in order to get out a train in time.

I hang my head in shame (while laughing all the same).

Sometimes I shock myself. 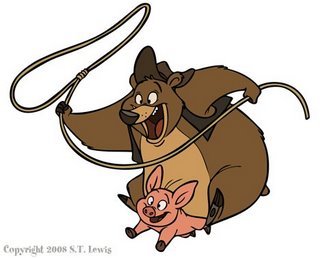