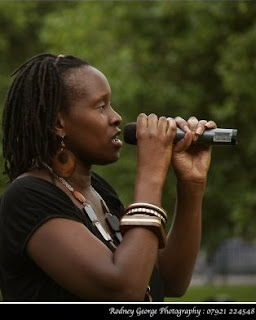 I'm privileged that you should ask me! It’s interesting cos I'm coming up to my third anniversary of starting these locks  - and seeing this request has made me remember the reasons I took this route, what it was that God was doing in me at the time etc...So I pulled this old blog from my old blogging days on MySpace from October/November 2006.  Here goes:


...it’s been three weeks today since I twisted my hair with the express intention of just...letting it be! That's right folks, I'm locksin it up (again). I'd been wavering between should I shouldn't I for about two years now, and I've done a myriad of weird, wacky and interesting styles au naturel. My favourite were the cornrows going into a Mohican - until a brother said I looked like Grace Jones HA HA HA!!! LIIIIBBEERRRTIIIEES!!!

Anyway...the main reason I've finally succumbed to the calling, which I believe it is (for me), is that anyone who knows me knows I like to do a billion and one different styles. I've done EVERYTHING - long brown Naomi Campbell weaves that made me look like a man in drag....and who remembers my finger waves? I've done Short n Relaxed sharp cuts, texturisers in various colours, really short baldhead ones, afro kinky braids, Bantu Knots, Mel B fright wigs....and I'm always stressing about it somehow!


Now, in one sense I feel like because its mostly covered these days cos its really not looking all that nice at the mo (loc wearers you know what I mean when you first start out) it is a means to do away with the unhealthy vanity in my life.


It’s also about realising that God gave me my very tightly coiled, spongy texture not to hide away or disguise it somehow. It lends itself better than any other hair type, to matting quickly. I've spent most of my time trying to 'tame' the frizzy nappy edges of my hairline when I've got really intricate or elaborate canerows. But no matter how hard I try, I just can't keep any style looking neat for more than a few days. It ends up being a colossal waste of very valuable resources that I don't really have. I'm sure my hair is happiest when it is just left...to be. No more running back and forth to the hairdressers, tryin to find a babysitter or the money, or to my friends' house urgent 'cos I've got a gig/trip and I've gotta look 'cris' for it. PLEASE! I sooo don't need the stress!!!


I've done Locs before but didn't look after it so well and I kept on twist, twist, twisting away until the roots were too thin to support the weight. I did it during my late teens for just under three years and that was the longest my hair had ever been. I guess now I'm older, more stable cos I'm grounded in Jesus Christ, not just this angry young black girl struggling with identity or the divorce of her parents and the loss of their home. So thank you Jesus for bringing me to this place of acceptance of your best for me!

That was 3 years ago, and though my locks are still only collar length, for me THAT IS A MAJOR ACHIEVEMENT because this is the longest my natural hair has ever been. I grew up in a very White middle-class Home Counties area - the only black girl in the class etc... I'd wear a towel on my head and shake it pretending to have long, flowing, MOVING hair! Many Black British women can identify with this.


Even as an adult who'd tried locks in the past but gave up on them, I used to cry at the state of my hair (ask my husband!) I remember, as a recent convert to Christianity and newly engaged,  standing there with clumps of hair in my hands from another horror session with the comb, asking God if I'd ever have any decent length. And what was I gonna do for my wedding?


For many years as an adult, I felt ashamed of the little hair I had and how see-through and wispy it was. It was dry and over processed and you'd need a ton of products in it to give it some semblance of decency. There was a constant cycle of relax or texturise -->enjoy for a week or two -->endure till it dries out and breaks --> chop it off etc...


Then miraculously through prayer, and steering clear of chemicals, I grew it back to about two or three inches... only to relax it again for my wedding. (I mean you can't have it nappy on your wedding day, right?)


I did relaxers for the first couple of years of marriage then, when my eldest came along 8 years ago I started to go natural again (again), but when it got long enough to 'ketch' I hid my hair away 'neath some goldilocks extensions.


I think I did my last ever relaxer in the months just before my second child was 'showing' - a couple of years after my first son was born. The last chemical process I ever did was a texturise and bleach - that was in 2003. After that, it was short afros or extensions, weaves or wigs. I remember the curly Scary Spice fright weave that became stiff as a board after hours in the birth pool labouring for my daughter!  I paid good money for that weave cos I wanted some decent après-naissance pictures but I ended up looking like Marge Simpson! And because of complications I didn't even get to have the water birth in the end!!


I nearly started locking in 2005 when a local loctitian almost convinced me, but I wasn't ready to handle the 'permanent' aspect of it.


I think I'd come to the end of myself in 2006 and all my burdensome 'works' when I entered the 'rest' of letting my hair be locked. It is like a sigh of relief, it really is. I can honestly say that it is the best thing that has ever happened to my hair. I always wanted length and now I've got a little bit! Hair that swings! Length is a crown of glory God blesses women with as a covering for their heads. It is a sign of my womanhood. God made me a Black woman with tightly coiled Afro hair - which I now love. I'm not afraid of water - I love it now.  Now I hate to hear about women feeling they must always hide or change what they have. It no longer steals my time trying to get it to do things it wasn't designed to do and it is relatively low cost, low maintenance. A couple of trips to the hairdressers a year to treat myself or for a special occasion...that's it, I twist it myself every few weeks. Glory to God for leading me this way!! 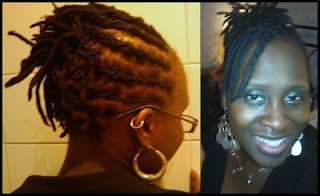 Goodness me! Her story could be mine.

Once again, thank you such wonderful, inspiring stories!!!

This is definitely a great story for those still on the fence!