My Battle With Alopecia (Alopecia Areata)

Who would have thought from the smile on my face in this photo (taken in March 2008 at a friend's wedding) that I was hiding a 'shameful secret'. 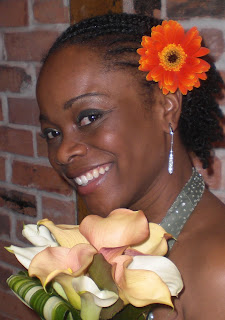 I had bald patches at the back of my head. Luckily for me (and my pride), the patches were small enough to allow them to be cleverly concealed when wearing an afro or a ponytail but time was running out. Two days prior to this, my loving husband had pointed out that yes, the patches were not only growing larger - they were growing towards each other (to form one large patch) and a new patch had also appeared. I was devastated.

It all started in 2007, shortly after we'd returned to London after a relaxing holiday in St Lucia, I gave myself a BC (big chop) and rocked a boyish cut or an 'all off' (which I often hear referred to as a TWA (teeny weeny afro) by my North American sistas. 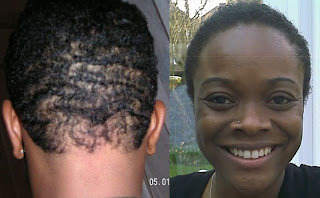 I can't remember liking this too much but HRH loved it!

My last haircut was at the beginning of end of March.  One afternoon while twisting my natties, my sister-in-law poked her finger into a bald patch on my head and asked "Hey gal, wheh yuh hair gawn?"  (She's Trinidadian).

I was shocked, because I hadn't even realised the hair had gone. All I know is that the spot she poked had been itching a bit for a while but had stopped. Imagine my surprise when I placed my finger over the place she  referred to!  It was absolutely smooth, like a baby's bottom. Completely hairless. I was flummoxed. However, I assumed it would grow back, maybe the hair loss was a result of the injury I'd sustained back in early February. This had left me bed-bound for 3 weeks and unable to walk for 3 months. Maybe the stress had taken its toll???

Weeks passed and another dime sized patch joined the first - still at the back of my head but on the other side. The rest of my hair continued to grow around them. It's funny that I waited almost a year before discussing it with my GP (General Practitioner). She poked her finger in the spots and chuckled YES she laughed at me : "You've been stressed" (How would she know?) "Stop worrying about it, it may grow back!"

What did she mean MIGHT GROW BACK??? MIGHT???? The two spots were getting larger, I had nightmares that I'd wake up bald like Gail Porter; and yet I thanked Gail for being brave enough to come out and talk about what was happening to her - because the only alopecia I'd known before then was Traction Alopecia (the one you get from having your braids/weaves too tight!)

Here I was, no chemicals in my hair, no braid, no stress (at least so I thought), a regular at my gym, health conscious etc and I was losing my hair. Welcome to the world of Alopecia Areata.

I kept my patches hidden but these are some photos taken when HRH was trying to convince me that it really 'wasn't that bad". (April, May and June 2007) 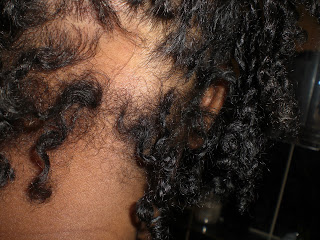 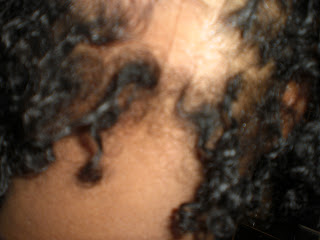 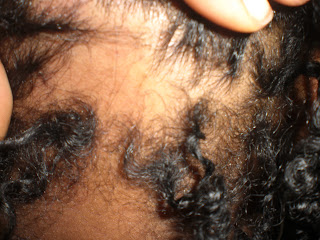 This was just one of the patches but you can see the progression over time.
In March 2008, shortly before the wedding photo at the start of this post, I took this photo on my phone; I was hoping to see regrowth of some sort... 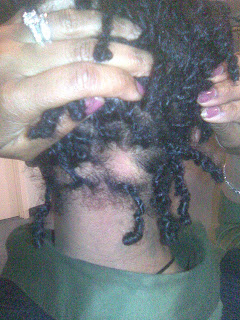 If the twist on the left had been down you would be able to see quite clearly a definitive 'line' or gap from my left ear to my right, as if someone had shaved me. *sigh* It's still painful to look at these pictures, even though comparatively my case may not have been as severe as some women e.g. GAIL PORTER!

I felt ugly and pathetic and wore variations of the same hairstyle all the time so that noone would see my shame. It is such a painful thing to go through, so I truly understand when people mention their struggles with PCOS or Fibrods and their links to alopecia.

For me, my story had a happy ending. When I became pregnant in March 2008, my body kicked started the hair growing phase (as usually happens with pregnant women) and not only did my hair experience a growth spurt, my bald patches filled themselves in.

This is Sept 2008 - again taken on the camera phone so apologies for the quality: 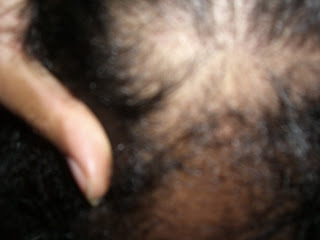 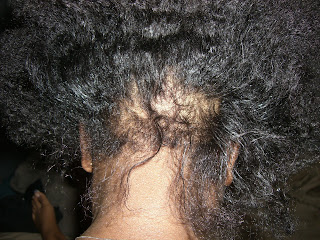 Many people have laughed at this photo (on my Facebook) cos I look like a crazy woman but really I was pretty thankful with how it looked because I knew what it had looked like before! There was a bald patch the size of my fist where now you can see wispy wavy hair. Through the misery of the hyperemesis gravidarum, I had to thank my son for giving me back my hair!

I did wonder whether the alopecia would return as soon as he was born, and I continued to worry about it for several months afterwards but he's a year old now and you can't tell where my patches were. I think I stopped worrying the day I went to my SL consultant for my install. I warned her she might find some short or scanty hair in the back of my head because it was growing back from a session of Alopecia. She just seemed confused. Later she said to me - there was no difference in length or density behind there, so she didn't know what I was talking about it.

Hallelujah! So not only did my hair grow back, filling in the bald patches, it grew to a length similar to that of the existing hair and therefore blended right in! Well almost, she did mention a section of poker straight hair that just wouldn't stay in the SL pattern - (so she had to knot the ends) - and I have since plait them because they kept unravelling but I am NOT COMPLAINING.

Last shots of the back of my head before I got locked up (March 2009). 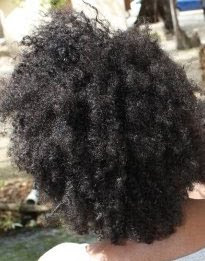 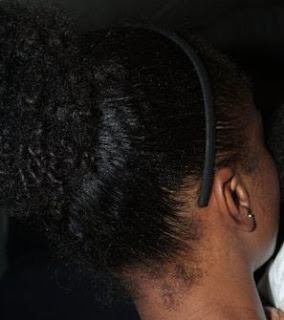 So, this is how I feel about Alopecia Areata. Ladies, if you suffer from it, know that there is hope - however slight, your hair MIGHT grow back. I was lucky, pregnancy worked for me. I realise that's not always an option (*grin*) and noone can really relate to the pain or embarrassment you're going through - except those who've been there. I don't have all the answers, just want you to be encouraged that there COULD be a happy ending for you too. Oh and if you're in London, head over to the Belgravia Centre, it's worth a try.

Until next time xx

Thanks for sharing this post. I think I might be suffering hair loss and to top it off it is in the worse place possible the top middle of my head! My consultant says it could be from my bad dandruff and if it is stress it could be to the stress that I endured in the beginning of this pregnancy. Whatever the case maybe I hope my hair fills back in, during pregnancy I usually grow hair too but now I'm wondering if it's too late, due to the fact that I'm due soon. Anyways what can I do but sit back in wait.

Glad your hair grew back and thanks for sharing.

I think we all have experienced hair loss at some point, but this type (aloplecia) is devastating, to say the least...Thanks for sharing your experience. Happy to see you have a full head of hair now :)

My mum had aa after her stroke, it's gone now, but worrying. Did yours feel / look like dents, too? X "

Thank u for sharing your experience. I will passing this info onto my mother who might be going through this currently. You're awesome!!

@Buttahfly -- is your hairloss related to the pregnancy? I am prepping myself for that cos I just know it's going to happen again... so my last pregnancy was a double edged sword: it 'fixed' the alopecia areata but I lost hair from my edges! Lol! I hope your hair fills in too, be encouraged :)

ps - all the best to your mama!

I'm actually relieved reading this. I suffer from the same type of hairloss every few years in the same area in the back of my head. The spot will itch for a while and then the hair would fall out. I haven't experienced it in a few years now. And my patch wasn't as big as yours. But I had not other explaination for it. Now I think I do. Thank you for posting this.

You know I had a small battle with alopecia earlier this year due to PCOS> Blogging about it was helpful. It helped usher me into changing my life completely. I am still working on it. But I haven't lost any locks since then...

My husband has Alopecia- we live in Dallas area..anyone have any ideas on treatment

Thank you for this. I'm having the same problem (been having it for so long I can't remember when it began), but it's occurring on the temple areas of my head. I can't understand it, but I'm hoping a change in diet (more protein and upping the vitamin supplement) will help.