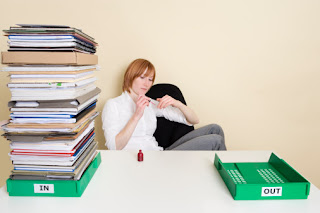 
Sometimes I wonder why people do the jobs they do. Are they in it for the money or did they just fall into their career straight outta school? Did they plan and strategically manoeuvre themselves until they got this job? Or is it just something that pays the bills?

I'm back at work and xmas is definitely over!  No more Mr & Mrs Nice Guy - no siree, say hello to Mr & Mrs can't bothered even though I'm getting paid to do this (or is it that they're at the:'I don't get paid enough to do this' stage?)

We're in investment banking. And yes, everything has to be done yesterday, yes, we're often stressed out and definitely overworked but in most cases we're (comparatively) well paid - just think about what teachers, nurses etc have to deal with and what they get paid! SO is there really a need to make things more difficult or act like they're gonna be so much harder than it need/ will be?


My current project kicked off last summer while I was still on mat leave. I picked it up in the Autumn when my colleague left for her maternity leave (great team for babies eh?): she did a lot of the preliminary analysis and project initiation and left me quite a thorough handover plan which I picked up and ran with.

Amazingly (not) when I started following up on tasks and issues, many of the listed contacts claimed not to know anything about the project or any prior conversations had with my colleague - sometimes even after I fwded the email chains they'd had (they preferred not to respond when I did that lol),.

In some cases senior staff had not passed info on to their junior team members so the juniors genuinely didn't know about their required role in the project but this was the exception.

What gets me is that some ppl are (possibly) so enamored with their own self importance that instead of getting on with stuff - despite joining the party late, they're still harping on to anyone who'll listen, that they only joined project 2 days/2 weeks ago so weren't involved in original analysis so don't know where these estimates/approvals come from. Blah blah blah.

Get over yourself. The figures didn't come outta thin air. Your boss (or colleague who has now left the bank) supplied them.

This project had a life before u, (yeah I said it), now stop moaning and get with the program. Before u were on it, it was scheduled to be released in x month. Instead of grumbling that it can't possibly happen, how about looking at why your colleague thought it could be done and work with the rest of us to make it happen man!

I just don't understand why some people seem to go out of their way to undermine or retard progress? It doesn't make sense - aren't we all on the same side?

You may not like your job but that's no excuse not to be the best at it that you can be, think about how many lost their jobs when Lehman and Bear Stearns disappeared? Now - let's all hold hands and sing along together before I have to take off my shoes...

And if this post is all over the place and weird that's because I'm a hormonal pregnant woman who just wants a little peace!

Email ThisBlogThis!Share to TwitterShare to FacebookShare to Pinterest
Labels: Life, Off My Chest