(Warning: still not about hair - sorry).

I've been having an interesting 10 days, so you'll have to continue to take my posts with a pinch of salt and know that they are tongue in cheek as usual. 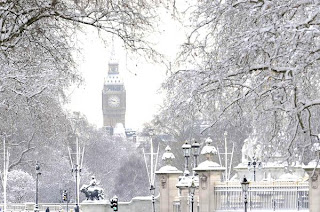 Today snowed. Y'all in the UK done know that. The past couple of days have been glorious, postcard picturesque, fairy tale fantastic; we've been living in a winter wonderland... 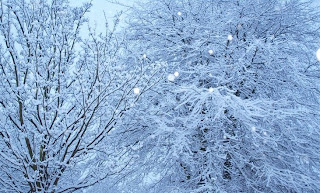 However, this is England not Canada, so as the snow falls overnight, we sleep restlessly, wondering whether the trains will work tomorrow; will the buses hold the road tomorrow, will the schools be open, and if they're not - will you still be expected at work anyway? Lol.

For the most part, I have been enjoying this – despite slipping and sliding and straining my weakened/extended tummy muscles all over the place.

I was a bit annoyed this morning when– after raising myself outta my warm bed, digging my car out from the ‘snow drift’, scraping ice off my windshield and driving (drifting!) to the station with my teeth chattering - I discovered that the blessed people at Network Rail had cancelled not one, but two of my morning trains (7:25 and 7:36) leaving me to stand exposed in the early morning darkness with a zillion other commuters for half an hour (since the 7:48 was delayed).

The only good thing about the build up of people was that it meant we were all squooshed together in the train (literally like sardines in a can) which is very good for warming up short pregnant people.

When I caught my connecting train – someone even got up and gave me their seat. So I was warm and happy for most of my commute in... only to spend the final 5 minutes of the journey sliding and sloshing all over the pavements as I negotiated the puddles of slush vs deadly black ice in an attempt to get into my building!
I was still happy though. I made it in to work on time and I didn’t vomit on anyone. I was a good employee and a good citizen lol.

Fast forward to home time... which came early today because 1) I got a message from HRH saying our son’s nursery would be closing 2 hours early so could I collect him by 4pm (which is when I normally leave work)... and 2) I received an urgent email at 2pm advising me that my daughter’s school was closing in half an hour ‘due to adverse weather’. Man... ya gotta love the UK. Amazing what a ‘little snow’ can do – just wreak havoc with everything! 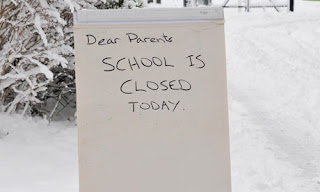 So I went from being ‘good employee’ to ‘that employee with kids who has to leave early cos of those pesky kids’... and of course there were the looks like “I bet she made that up, it aint snowing THAT badly out there...”

Anyway, I packed up and headed off, cos at the end of the day, I am mummy and mummy Lioness has to see about her cubs (everyone knows lions just parade about and look good!)

The trains home were jam packed, either everyone else had kids to rescue as well or some sort of mass hysteria had hit the city! There was such a mass exodus hahah and you should have heard the spouses calling their partners “Get out now while you still can! They’re predicting more snow! They say train services will be disrupted, delayed or cancelled randomly!” (Mass hysteria I tell you – not that this stopped me from phoning HRH and suggesting he let his workers go home early, cos no point in them being unnecessarily stranded in the boon docks for nothing! Yes guys - you owe me :P

With this ‘every manjack for himself’ mentality – there was no hope of me getting a seat on any of my trains home, so I just stood and thought happy thoughts, and that was fine by me. 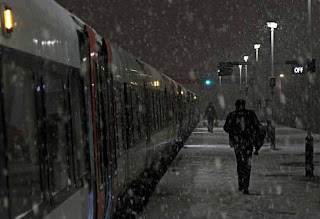 Stepping on to the platform at my station I almost disappeared completely. I swear the snow came up to my eyes... but then again I am on the short side *grin*. I dug my car out again and sat inside with the heat full blast until both me and my darling machine were defrosted. Off to pick up the cub. 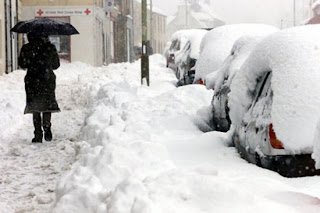 CJ found the snow fascinating, and kept trying to catch the big fat flurries as they fell from the sky. So much for helping me get him into the car seat quickly!

Nursery says – ‘we might be closed tomorrow...’;
I’m thinking – ‘you better not be, I got work to do!’  I mean, have you ever tried working from home with a mobile one year old running up and down? Let’s just say it calls for superhuman powers of patience and concentration and I am NOT up for the challenge this week.
Fun, fun, fun!

Off to collect the other cub, crawling along at 5 miles an hour *yawn* but really I am still not bothered because everything is just so beautiful and the snow has killed all the noise so it’s all so quiet... I love it! 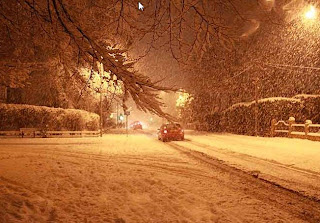 I turn the corner to get off the beaten track (and its miles of traffic) and head slowly down a snow packed lane, it's getting dark but I’m still loving it.

I pull over for a sec to answer the phone (it’s the girlie cub) – I let her know I am almost there. Check my mirrors and indicate, I let one car pass me, then I pull off (still at like 5 miles an hour lol).... there’s a van behind me – wouldn’t you know it the dude is travelling a lot faster than most other people on the road and decides to beep his horn at me in disgust – then overtake me like he’s driving in the F1? "Ok, boar pig (i.e.road hog) – you guhlong". I’m still not bothered. These roads are treacherous and I am not going to die just because you want to “hurry up and wait”, plus there is a blind corner up ahead and I am gonna take my time in case someone is coming or the kids are walking there.

He speeds pass me, I watch him and right before my very eyes – I see him washout. At first I thought he was parking because why else would his van be heading over to that side of the road? Then I realise that he actually has no control over his vehicle, so I let my car grind to a halt; driver behind me also stops and we both watch the speed demon in fascination as his unwieldy van does a sweet 180, missing a guard wall and a railing by a nose hair.

He looks at us, we look at him – and for some strange reason, without any warning at all, I burst out laughing.

I don’t know why I found it so funny; maybe it’s that Bajan instinct to laugh first, help second... or maybe I’m just mean. But I laughed... and he saw me laughing and I still didn’t feel bad about laughing. I just cracked up, thinking “that’s what you get man!” sometimes there’s no point rushing, as Bajans say “tekking time ent laziness” (although I substitute ‘foolishness’ for ‘laziness’. We will all get there in the end – well, most of us anyway.

Shamefaced, he managed to point his van in the right direction and STILL zoom off round the bend. Me? I STILL didn’t go any faster than 10 miles an hour – why? So I can wash out too? No suh, not me!

Funny how when I did round the bend, his stupid van was still there waiting at the junction to join the looooooooooooooooooooooong queue of traffic heading down the hill. Me? I live uphill. I couldn’t stop laughing as I pulled out of the junction and headed in the opposite direction, all the while explaining to CJ: “tekking time ent foolishness... especially when the council won’t salt the roads. HAHAHHAHAHHAHAHA. 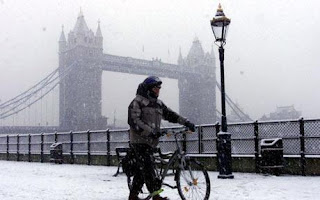 You had me crackin' up! LOL! Sounds like you had a good laugh too :D

Too funny -- love the vivid description as well as the pictures!

Lily, you should moonlight as a comedian!! You're sooo funny!
I'm guessin with all the snow you guys aren't wantin to come to mum and dads are you? I am here till monday? love to you all! x

You had me laffing so hard at the white van man! Did he leave his brains at home?!? Shame shame shame on him, on a day that folks were generally looking out for others. You should have got a pic of you and snow drift at eye level LOL.

Hilarious- I would have laughed at him too. You know that y'all ain't accustomed to snow and still driving like an idiot.