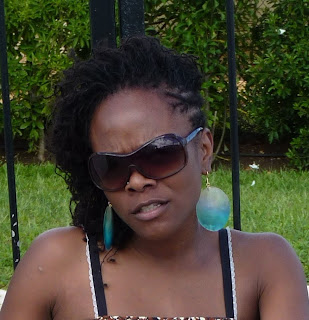 If you've been following me for a while (and of course if you're one of my 'flesh' friends) - you will know that I like to lark about and make fun of myself. This photo was taken the day after the wedding at Sandy Lane.  We were visiting some friends and I wanted HRH to take my photo because I was still loving the way my hair looked. Being the reluctant photographer he is, he ended up taking aaaaaaaaaaaaages to simply frame and take the shot - me being me - I started dancing and mucking about as shown in the full length image below. 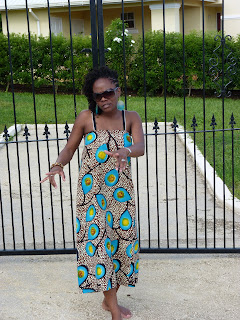 I was jamming and singing "She's Royal" by Tarrus Riley (read lyrics & listen here).
I posted this pic on FB profile with the caption "Rootsy and Royal". Of the 20 comments and 'Likes', 4 were 'negative' in that they felt I looked like the 'stereotypical angry Black woman'. (See below). Two of those who 'disliked' the look were men. HRH did not comment but admitted that this was not 'a favourite'. LOL (that means he hated it).

Basically it got me thinking... about Beauty and perceptions of beauty... and of course 'stereotypes'.

Here are the comments:

-- that was one of my nieces, who is of mixed heritage and lives in an area where people of colour are incredibly scarce. Does this have any bearing on her perceptions of beauty or do I (her aunt) just look mean and angry and ghetto in this picture.


"My dear, I kinda tend to agree wid (your niece) - like the dress, like the hair somewhat - but the look just not cutting it. Yah looking a bit like an angry barefoot rasta woman wid de pose. :P"
-- that was gentleman number 1, fair point re: the pose. Depending on your perspective, I could have pursed lips because I am singing or because I am sucking my teeth/stupsing. I could be squinting from the sun or frowning from anger. This is what made me wonder whether perceptions of Beauty come into play. If I associate this type of outfit/pose with 'anger' or 'militancy' then clearly anyone in this pose will come across as threatening. Additionally, if my hair were straight in this photo -  whether in a short bob or a ponytail or just straight down - would I still have been perceived as looking like an angry woman? Or would it have been easier to see that I was playing around?


"Bro, you have a point I'm looking for the big rocks she just threw at someone. "Get outta me face before me hafi thump yah!" Still nice dress note the matching ear rings,

All the 'Likes' and positive comments were from women who in general liked the outfit (dress + ear rings) and/or the hair. Some even agreed that the image looked 'rootsy' or 'regal'.

So... does this mean that men (or my male friends who could be bothered to comment) don't like this type of look on females? Does this mean that men and women often have differing perceptions on what is beautiful? (With men - and some women- not really like the 'Back to Africa'/Natural look?)

I know that for me, despite being natural (on and off) for aaaaaaaaaaages and currently one year into my locking journey -  well, I never really thought about my own preferences.

It's only recently that I can say that I prefer to see women with their natural hair or rather their OWN hair... because there are some ladies who really rock a healthy head of relaxed hair.

I personally just don't like when weaves don't hang right, (or ride up in the back - you know what I mean) and I guess for them to hang right they have to be human hair - which raises all sorts of other issues.

I like braids and braided hairstyles as long as they're not too tight. I used to be indifferent to locks (of any kind) but now I really like them and love to see well cultivated or manicured locks on men and women.  I also like natural heads: curly, coily, kinky... afros, twists, cornrows, whatever. So I can see that my perceptions of beauty have changed over time as well.

I guess what I'm saying is that - I look at that picture and I see a woman in a print dress with nice earrings and a cool hairstyle getting her groove on. Someone else sees an 'angry black woman' or 'ghetto woman' or 'jamaican dub singer'.

I can appreciate both perspectives but I prefer to look at the picture and see 'rootsy royal', a Black woman, expressing herself naturally. (or Bajan Lily just mucking about barefoot in front the gates of a house).

What do you see? 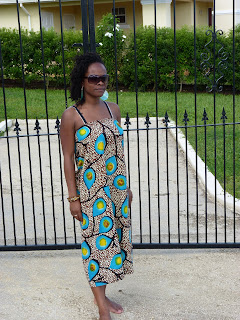 I have to say the word Ghetto did not come to mind. I thought you may have been on vacation because you were barefoot in a dress. You look comfortable. I thought your hair looked nice, and as far as being angry, in the very top zoomed in pic, I thought you looked angry, but I thought it was a pose, not like your general face. LOL. I think you raised some interesting points too! I am actually shocked that you got negative comments at all!

Thanks Yahvinah. It was an eye opener lol. Truly a question of perspective and perception.

I thought this only happened to African American women. It's there too. WoW! I mean I know racism is everywhere but the angry stereotype.

You do not look ghetto. In ATL we have a whole diff kind of ghetto though (LOL!). You look pretty and natural.

I think the angry thing is one of those "chicken and egg came first" arguments. How long can you tell me I am angry or should be angry before I become angry? And why is it not acceptable to be angry even if you were. And what does the ghetto have to do with anger?

Ghetto please 'dem nah see ghetto yeat!'
You look like you are chilling and playing around - having fun. You are so cute!

It is sad bc I usually walk around with a smile on my face, even here in poserville Los Angeles and people always look shocked when I am pleasant to them. What do you expect me to be?

Hello,
I'm new to locs, and have just recently started to follow your blog. I think you look lovely, and comfortable. Here in my part of Florida I see a lot of women rocking cool, comfortable dresses like that, I have a few of my own. When I look at the pic I don't see an angry black woman. You look like you're having fun taking pics. I like the hair style, by the way.

I think you looked really, really lovely in your photos,I do not understand why there were those negative comments.....Why do people have to be so mean?!!!!!