Tonight I watched 'House' (season 7, episode 11) and had one of those 'eureka' moments. The dynamic between Dr Cuddy and her mother really struck a chord with me. In fact I'm still teary eyed as I write this. Don't worry if you haven't watched the episode or don't follow the series - you don't need to - stay with me.

My mother- God bless her- was always hard on me. Much harder than on my younger brother (I can't speak for my older siblings because the gap between us is so large I can't really compare how they were treated when they were my age).

He was taller than I was (and cuter some might say) and he was always better at maths than I was. When preparing for our Common Entrace (11+/SATs), we'd do past paper tests together and he'd consistently score 100% whereas I spent months slowly working my way up from low 70s to 90s. I would hear him outside playing cricket with the boys from the neighbourhood while I had to stay at the table and correct my mistakes or relearn some equation. I won't count how many sunsets I missed this way, because in the end the sacrifice was worth it, I gained entry to one of the top secondary schools in the island (number 2 in the rankings). My brother of course passed for the number 1 ranked school but I was happy with my lot because it was where I wanted to go: 'the pink school with the blue uniform' was good enough for me!.

During secondary school the disparity continued. I'd bring home a brilliant report card 'marred' by say one or two Bs and be berated for not bringing home all A grades; while lil brotha would roll in with C's and D's to hugs and reassurances that he'd done his best, better luck next time. WHAT??????


This burned me year after year; nothing was ever good enough. My artistic interests like music, art and street dance were frowned upon; while my brother's athletic trophies gleamed in the cabinet in the 'front house' for all to see. I felt that he had free reign to be whomever he wanted to be while I had to constantly fight for a lil self expression.

photo credit
My mother was always on my back. I felt like a right jack... Nothing was ever good enough. Is it cos he's a boy? I used to wonder. He was always her darling.

And I tried everything I could to make her like me.


She even chose my streams for me, she felt my forte was in languages (clearly not math hahah) and so I spent a good few years learning Latin (!!) and French and Spanish. She would have added German too had it been on the curriculum lol. She wanted me to be a translator for the UN. I wanted to be a dancer/actress/singer/songwriter hah!


(Looking back, she was right about the languages and had she not been so ironhanded about it, I probably wouldn't have rebelled and dropped them after my o level exams!)

I spent the years after high school proving to her that my choice of A levels were good and I could and would do well in them despite her disbelief. "No mummy, I am not going to be a washout or a failure", "Going my own way will not end up in failure".


In setting out to prove her wrong  I won myself a (partial) scholarship which gave me the opportunity to attend  Cambridge University (UK) with all the prestige and acclaim attached. I was not in Barbados when those A level results came out and she saw my name in the newspapers (lol - that must've been something!) However, I still remember during her 'congratulatory phone call' - she lamented that I did not win the full scholarship SMH. I was like 'this is still GOOD, mummy!' but as I said, nothing was ever good enough.

During university, she and daddy did their best to supplement my scholarship and grants, and I am glad I had their support. I remember the encouraging phonecalls when I was upset or confused (the university during that era could often be quite marginalising for some of the Black students); and the shedloads of wisdom she shared.  All in all - a good proving ground but she wasn't the happiest mum at my graduation because she rightly - believed that  I should've achieved a Higher class in my degree (which I probably could've if I wasn't caught up and distracted lol!)


I remember being so excited when I landed my first (post)graduate employment contract. Surely this would make up for my 'failure' at uni. I remember her lukewarm 'less-than-impressed' reception despite the job being with an investment bank paying more money than she and my dad had ever earned (combined). I thought she'd be proud But no I failed again.


As the years passed and the pay rises and bonuses and the masters came and went she still didn't seem impressed. At least she never let on to me that she was. I have never heard her say: 'This is my daughter 'Lily'', with the same warmth and pride as she says: 'This is my son, Goldenballs The First' hahahah !


The proudest I've ever seen her (with reference to me) was when I got married to HRH: probably bcoz she thinks he's made of moondust or sthg! Lol!

All jokes aside, my mother is shrewd and astute. She has a savvy head on her shoulders. It is virtually impossible to put one past her and I would seriously hurt anyone who tried. If she is in your corner she will fight tooth and nail to see you succeed and having watched this episode I can now understand why she rode me so hard!

We didn't have much and even if we did there wouldn't be much to inherit with five of us to split it between, so if we were gonna make it in this world we would have to leverage whatever resources we had.  The older siblings were already flown or preparing to fly from the nest. My brother had his athletics, therefore I was forced to use my brain. That constant maternal attrition created a driving ambition in me, a burning hunger for success (not necessarily material trappings but personal development too). I think Cuddy summarised it best when she said:

"...you were always harder on me... And I understand why now. You saw something in me that you didn't see in (my siblings) or in yourself and you wanted that something to grow and blossom into something special. "

Mum, That's why second best has never been good enough. You knew I could do better. And you were right. I only wish now I'd realised this sooner instead of spending the last 3 decades fighting against you, often deliberately doing just enough to get by ( because, hey, if you were gonna ride me for getting an 'A -' I might as well just get a 'B+' and take the same cussing for less effort lol ).

From today, in honour of you and to thank you for all that you've done for me - even when it didn't feel like love at all- I promise that everyday whatevr I am doing I will be the best that I can be. God made me smart for a reason, let me figure out how to make the most of it.


Oh and yes, my lil brother is still her darling but so what? I realised that I don't need to achieve in order to impress her; I can do those things for me - just for the hell of it or just because it interests me. I don't have to do anything to gain my mother's love: I already have it: I always did. I just didn't know how to recognise it. Let the woman have her 'sweet boy', I'm good. 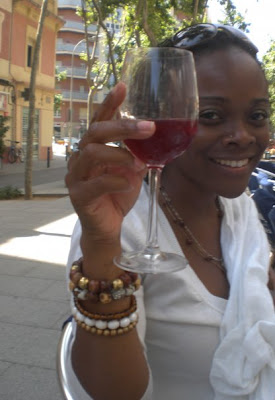 WELCOME TO THE TAPESTRY OF ME.... These are my words and this is my journey, from 'there to hair'!  My life, the lessons learned in and through love and loves ones; and my hair affairs. http://lovelifelocks.blogspot.com

Hmm, the similarities are astounding! SNM!

Hello sister: the joys of tough love eh? And YES good old Goldenballs haha . no puedo creer que Le he ententido, Señora Profesora! I'm much better at french but only marginally competent at either lol (I read and understand better than I can write or speak!)

Oh and as for resurfacing: can't keep me down!
:)

It probably sounds really crazy, but I always wished my mom was like that, she was always so luke warm about everything, I just got the feeling she wanted me to aim low... Mabe she didnt want me to stress too much over stuff... :)

So good to hear from you!

My child "you have arrived!" Congrats and Be Blessed! And my you with the knowlege you've gained, be able to "repeat the triumphs" but "not the cycle".

thanks for sharing, my dad was & still is the exact same way, but I have yet to find the silver lining in his behavior. on the flip side it looks like your hair is growing in or are my eyes deceiving me

@Yahvinah: YES it sounds crazy! Growing up I just wanted her to lay off! I can't imagine what it must be like to actually WANT some of that pressure :) Ps congrats re: med school and your locs are looking lovely!

@ Thandi 'smile & wave' :)
@ lovability: I TRULY hope I don't repeat the cycle!
@Euphoria: see how long it took me to find that silver lining? Re hair growing in: no not really,I'll do a post soon and show u.

Hey...great to have you back. I enjoyed this. I have experienced similar treatment from my father for whom good was settling for mediocre. I get it but I still think the methods could have had the wrong effect. What if I just said "screw it all" and acted like a fool in response? My mother thought that anything I did was perfect. Therefore, her views have always been positively predjudiced (bless her). Okay now, I have a question and a comment. What is SMH? Now the comment: I didn't know your brother went to Combermere (you did say the #1 school right?).