The Good, The Bad & The Ugly

Mostly the pictures speak for themselves.
June 2010 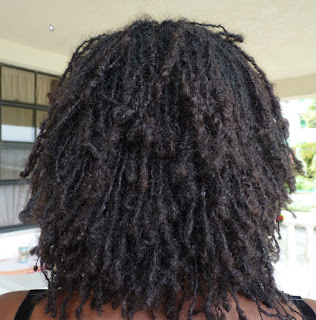 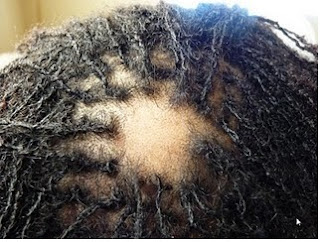 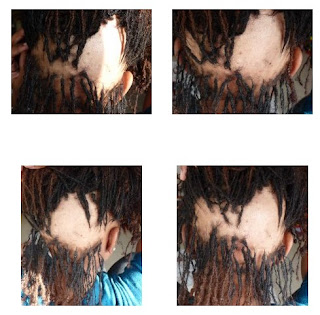 December 2010
I  found it very hard to take photos after I lost all my hair on 31st October... I've just been looking back and this is all I could find, no shots of the back of the head because it upset me so much I deleted any as soon as I found them! However you can see the horseshoe beginning to emerge at the front, particularly in the lower picture.
Oh and that's my younger brother and his baby locs - he has THE most unruly hair that I've ever come across! Seriously...  this was neat when I started them - since then they've taken on a life of their own, thick curly naughty locs :) 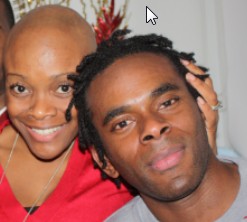 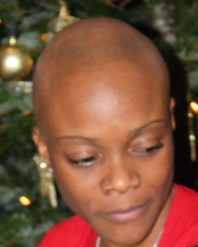 January/February 2011
After 8-12 weeks of topical steroid treatment (applied directly to the scalp in an attempt to stop my immune system from attacking the hair follicles).  I was also using a modified version of this natural recipe (thanks Ofo).
In the first picture you can see loads of scars - a legacy of whatever irritation was contributing to the hairloss. It was a shock to see so many small scars as my scalp was not sore or itchy but clearly something was going on. I hate that picture but I'm showing it because I promised I would keep it real and show the 'bad' and the 'ugly' as well as the 'good'. 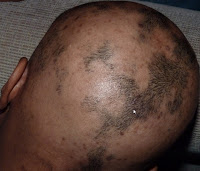 February 2011
Walking around in Barbados with no hair was an UBER challenge, especially since people had seen me with a full head of hair just a few months prior. I still owe you a post on that... but this pic was taken by my favourite Bajan artist Kraig. Yearwood of 3rd Revolt. He always makes me smile! 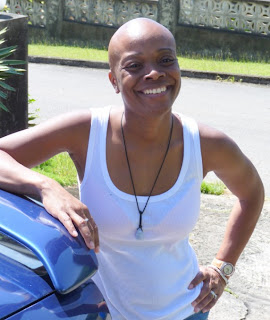 March 2011
The scars have healed over and it doesn't look so 'ugly'.  This pattern is what my husband calls the 'map of Africa'   What I think he means is it looks like a continent.  My sister-in-law says that if it grows it will become a natural mohawk! However, it never grew longer than this. 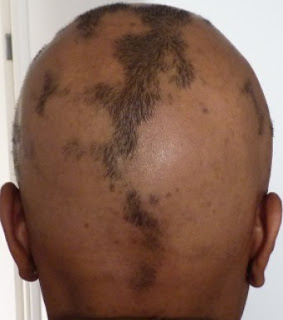 May 2011
I am now on week 3 of a more aggressive treatment. So.. additional growth in the 'Map of Africa', no significant growth elsewhere i.e no filling in of the patches. 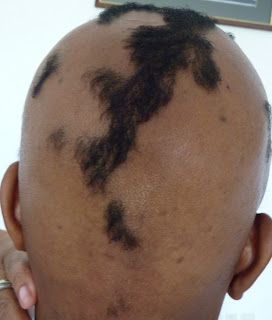 And just in case you want to see these 'UGLY' but GOOD pictures side by side... 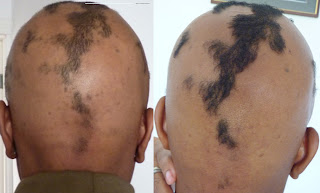 I have 5 weeks of treatment left. It has been 7 months since I lost the last loc.
I will continue 'hoping' for another 5-6 months and after that I will accept that my hair probably isn't coming back - by then I should also have an afro, kinky twist or loc wig that I will wear - cos I can't be dealing with shaving 'the map' every couple of days.
Comments? Suggestions? (Words of encouragement? )
Weigh in below...
Later!
WELCOME TO THE TAPESTRY OF ME....
These are my words and this is my journey, from 'there to hair'! My life, the lessons learned in and through love and loves ones; and my hair affairs.
http://www.lovelifelocs..com

I have the deepest admiration and respect for you. In my opinion, this post took courage that I know I don't have. If it helps, seriously, you look as beautiful bald. love,peace & sunflowers ~robinc

You may not have hair on your head, but you definitely have a POWERFUL light in your eyes!!!! Keep on keepin on Queen because you represent the strength that makes us who we are as beautiful black women.

You are absolutely beautiful without hair. You look so natural and you wear it well. As for the shaving every few days; have you tried waxing? It will last a longer time but personally, I think the pattern is very neat. People here get designs cut into their hair all of the time and that is what I am reminded of when I see yours. No wigs etc.,please! You are beautiful as you are.

PS. I visited Barbados for a week a few years ago...loved it and can't wait to come back again.

You're one brave lady! I must say your head is a lovely shape. I dont know what you can do about the 'map' other than shaving it off. Question: did those areas grow in response to treatment?Isn't it a good sign that hair is growing in those places? Surely that means the rest of your folicles can be kicked into action too?

I really do love your sense of humor and courage that you always express through your post. I really hope your hair is growing back, and your "Map of Africa" patch is a sign of that right? If you are waiting to see if other area are going to fill in, then yeah wear a wig. I mean it not going to be a permanent thing, and right now you just want to make sure your hair is growing. I'm really hoping for the best...(*finger cross*)

Sis just know that we our all in your corner. And no that no matter what happens with your hair your great spirit will help you to continue to be the great person that you are. I'm sure that this story will encourage others that are going through this, to stay lifted. So continue to stay positive and continue to stay strong! Hugs :)

I commend you for sharing, I know how difficult it is to share when it comes to our crown of glory we like to pretend that it's everybody else but not us, so I know your struggle cause it's my story as well, but you bring me hope because my scar tissue looks like yours & I was told that once scarred no hair would grow in so to see that you have hair in your scarred area gives me & I am sure some one else a ray of hope, so tearfully thanking you for sharing

You are such a BEAUTIFUL sister!!! I know you must miss your hair, but girl you look so prettty bald. You really do rock the look. Peace and Blessings!

Thank you for sharing these photos, you have great courage and are an inspiration for others. Its a good sign that you have a map as surely this means that the rest is to follow. You may wish to consider leaving it be to see just how long it will grow.I send you prayers for growth. Kittylocks

@robinc - thank you - it sure did take courage! And many people question why I would bare myself like that... Thanks for the sunflowers *grin* By the way, your hair is so thick and lush!!!

@Afrolady: Thank you for the positive encouragement.

@Ni: I hadn't thought about waxing... hmmm, thanks for that tip. If I muster up the courage to let someone in a salon/barbershop see my head - I'll do a post about it. And lol re: the wigs :)

@Anthia: Are you sure you and that plumber aren't related? LOL - he complimented my head shape too hahaha. Oh and yes, those areas grew in response to the treatment so 'yes' it's a good sign - maybe I'm just being impatient :)

@Kreyola: I'm hoping for the best too!

@V: Thank you. You're right - it is incredibly fortifying to have people wishing me well (especially after encountering the strange looks/stares that I get on the street sometimes!)

@Euphoria: I remember praying and believing for your healing, not realising that within a year or so I'd be facing my own hair challenge! I share your tears... and I remain hopeful for us both :) Smile now!

@Lovin - THANKS! Peace and blessings to you also :)

I'm amazed at how your hair was hiding such a beautifully shaped head!Cold comfort, but wow, you look awesome bald.That's a big 'look' over here, people would admire you and think you did it on purpose!Sis, do you!I look forward to finding out which direction you move in.You're an inspiration.

Thanks for sharing this. You are an awesome lady, with a huge amount of courage. Whether your hair grows back fully or not, I think you have shown that you look beautiful either way. Your head is a great shape for rocking the bald look. I am sure that your courage throughout this difficult period in your life has taught volumes to your children, about courage and grace and what inner beauty really means. Love you girl!!

Please do not publish, just for you x

Hey Lovely x
I am on your blog now with my friend who is doing her SL's tomorrow morning.
You are something else, i KNOW I would be nowhere near as INCREDIBLE as you have been thru this experience. Bajan I am just speechless. Your courage surpasses ...? I know others may think it is just hair ... but! Rock the wigs lady, In fact as I said before, rock that lovely head of yours. You are beautiful. You are also educating us all on how to get thru, no matter what. BIG lesson! Bless you hun x

Thank you for your love bc it was not only courage that got you to do this post but also your love for us, as your readers. In sharing your vulnerability with us, you share your love. You are such a blessing!

Hi there, just found your site. You are a very brave woman indeed. I am sitting here mouth open, feeling shocked, saddened at the loss of your hair. But am equally touched by your openess, and your amazing resilience. I pray you continue to stay strong and you have the most amazing smile.

You are beautiful! I changed my mind about sister locks when I read someone else went bald too but keep using castor and olive oil daily. It helped my mother get hair back after being bald for years from a chemical burn. It is slowly growing in

Thanks anonymous, I appreciate your prayers and positivity.
Thanks Ginene - I just want to stress that Sisterlocks was not responsible for my hair loss ie me going bald had nothing to do with Sisterlocks - had I had traditional locs, relaxed hair or loose natural hair - I would still have gone bald because it was an underlying health issue. I'm using an essential oil blend in castor and jojoba oils and it seems to be working for me. I wish you and your mother all the best - do keep me informed if you can!