Yes, I'm back.. and I'm angry (lol)
First things first - what happened to me? (LOL)
The day after I published my last post (in which I mentioned I had gone awol because my son had chicken pox for 2 weeks) - my baby daughter manifested the same disease... chicken pox must have been in season because a few of my friend's children got it too and they hadn't seen us in aaaaaaaaaages and their kids don't go to the same nurseries either!
So.. little Miss was sick AND I resigned from work - so at the moment I am a full time SAHM (stay at home mum) or rather I am a full time Sisterlocks 'Consultant' and loctician. I'll fill you guys in on all of that later - I just really wanna get this off my chest (which used to be the name of my blog "Off My Chest", lol)
On with the show...
Little Miss has a rather loose curl pattern, (y'all have seen the pics), cornrows and plaits work themselves loose in about 24 hours or so. I have learned that trying to 'contain' her hair in intricate designs or neat rows of braids is a complete waste of time - because they will look awful the next day (sometimes the next morning) no matter what we do and I am not going to put holding gel or wax in her hair for the sake of a style. Most days she wears two, three or four afro puffs and everyone is happy. Or almost everyone... 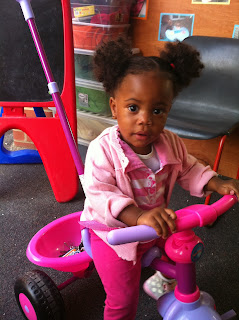 On more than a few occasions when I've sent Paz (the baby) to nursery with her hair done one way... her daddy or I will pick her up in the evening with her hair done ANOTHER way... At first this was amusing.. and once or twice (when I'd been run ragged nursing her brother back to health) it was even helpful ... but things have gotten out of hand now.
Back when it was still amusing, I asked who was doing her hair, the lone AfroCaribbean worker in the school nervously raised her hand. This is the worker that my daughter ADORES, every morning she will squeal and run to this lady and laugh and giggle... and Paz even goes so far as to blow kisses to this woman when she is leaving for the day. (Yes I am rolling my eyes).
How could I chastise her? Plus she seemed genuinely frightened (maybe she thought I was going to report her to OFSTED or something...) so I just said: "Thank you, I was busy with

But ah bright she bright! ah fi har pickney?? (in my best Jamaican dialect!) lol ah hell no! If you do come across her again maybe politely say, I know you love doing her hair but thanks for your help previously but I got it under control now. With a smile, then if she dont tek heed blatantly say I would prefer it if you do not style my daughters hair when I send her to nursery and if she still does not listen you may have to resort to canerow!! Good luck! x

Lissen me good! from day dot I am going to draw a big fat line across my girls forehead ... NO! presumptious!

So much more I could say but feel I am already showing my ignorance (ahem) on the net, not a good look! LOL!
Not keen on people hand in childrens head, SNM?

Tell her straight up. Please stop doing her hair. It isnt good for her hair to be manipulated too much(as in her hair was done last nite and you did it again today). The hair dr says less is more.You've done your bit,but leave her head alone now. Her dad & I dont like her going to nursery with one style and coming home with another.

I agree with OFO I would tell her like it is and only resort to threats if she continued but it would really get on my nerves. She is really pretty.

If you don't see her in the mornings or afternoons, then you should leave her a note. Be kind but firm in the note.

Yeah I would err toward being firm with her. I wouldn't want her pulling the babies' hair out pulling it too tight, she might want to pull her kids hair out, but you don't want your baby having traction alopecia, that hair takes a LONG time to grow back at the temples... And it could go toward traumatising your baby when you are doing her hair down the line.

I will try to catch the Worker, failing that I will leave a 'firm' but polite note. No traumatisation or traction alopecia for Bajan Baby !!!

ps Nai and Mac - y'all had me creasing up. I love it when the islanders 'brukk out' lol

I think you handled it well, better than me. I would've have been pissed!

Baby's girls her is just lovely!

I'm sure she gets the point now, lol

Great advice so far, and I hope you get the chance to see her (the worker) soon.

Your daughter is soo sweet wow in a blink she will be a woman!!!

What everyone else said-who I could understand ;-) Please update us on the hair saga once you've communicated with the hair molester.

The whole hair thing with Paz and nursery is hilarious, but as a mother I find it very disturbing. The woman needs to stop. Paz is not her baby and she's not a doll. All that time doing her hair is stopping her from playing and having fun. And Paz's hair is none of her business!

Here is to peace and hair grease!! lol

Ya'll are FUNNY!!! OK, seriously, I would make an effort to get there when she is there, even if I had to get off work early. I would wholeheartedly apologize for letting this go on so long, thank her for her help in the past. Then tell her (IN NO UNCERTAIN TERMS) that I DO NOT want her re-doing my child's hair.

I would also let her boss know that this situation has gone too far, has made you uncomfortable and you wouldn't want to have to remove your child from the nursery if this sort of thing continues.

My daughter had a head full of hair when she was little (there was more hair than it was HER). I constantly had "offers" to do her hair, which I politely and FIRMLY declined. Girl, people are truly CRAZY!!

WOW!! the nerve of some people, now I wasn't raised in the hood but somehow the hood always comes out of me & I would have let her have it down the front & back. First of all that's nasty you don't know where her hands or the comb she's putting in your baby's head been, & second if she's combing your baby's head then who's looking after lil' ray ray & nem!! girl put your clown suit on before your baby be bald headed!!